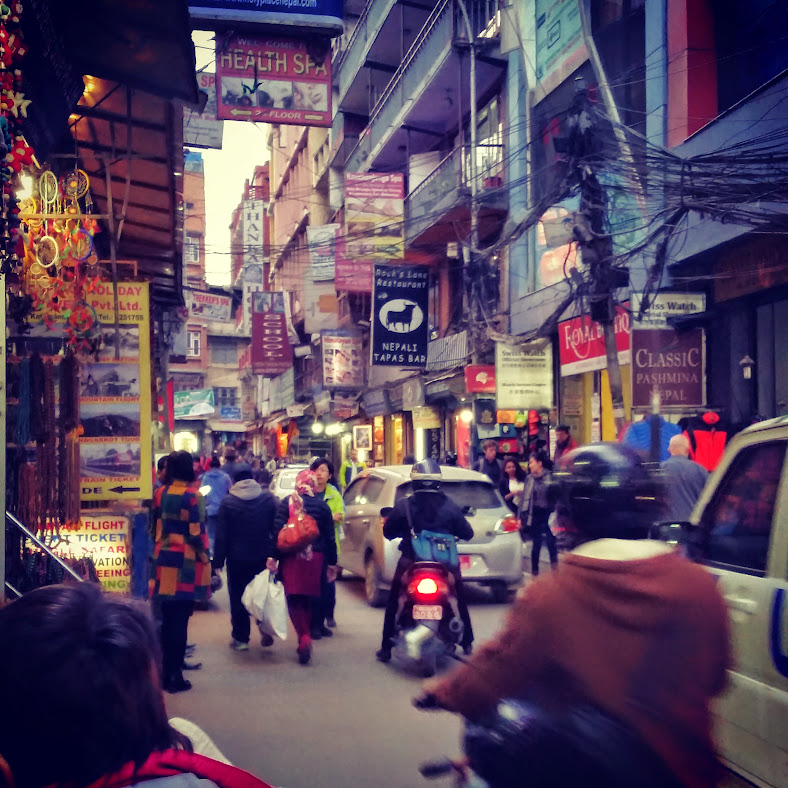 I’m back from my pilgrimage to Nepal and India, and I want to start writing down some of my experiences so you can have an idea of what it was like. Of course I feel very intimidated by the task- the trip was so powerful and had such a profound impact on me that I’m afraid any attempt to capture it is doomed to failure. But I will try.

I arrived in Kathmandu, Nepal, on Feb. 12th, two days before the pilgrimage had its official start. Lots of us arrived in dribs and drabs in the week leading up to the pilgrimage- it’s a long and difficult flight and there are a lot of opportunities for missed connections and lost luggage, and no one wanted to show up for the first morning directly after thirty hours in the air. So, a day or two early was good.

For me the pilgrimage was fraught with anxiety and fear long before it began. I wanted very much to go to all the Buddhist holy places so I could experience them and benefit from a practice perspective- but I didn’t really give a shit about being in India other than that. I did not want to travel, I did not want to use the time and money, I did not want to have to deal with the ordeal of getting a passport and the necessary visas, I didn’t want to get typhoid pills and malaria pills and all the other shit…I was in many ways an unwilling pilgrim. As the day of my departure descended upon me, I was flooded with fears and regret. I was absolutely convinced that the trip was a terrible idea, that it would be a disaster, that I would die in a plane crash or from some terrible illness- all thoughts that are pretty far from normal for me- I mean, I am a good worrier, don’t get me wrong- but this was an order of magnitude higher than what I was usually capable of generating in the fearfulness area. And this fear built upon itself continually until Yolie dropped me off at the airport and I got in the check-in line with six hundred Chinese people trying to get back home to Guangzhou.

Then my anxiety just vanished into thin air, like so much smoke.

I mention this anxiety and the obstacles to the pilgrimage because I believe that they are not uncommon to experience. Maybe it sounds kind of new-agey woo-woo, but almost everyone I spoke with about this aspect of pilgrimage had a similar experience.

Something does not want us to go on pilgrimage.

I don’t know if it is just a manifestation of our ego’s desire to maintain itself, if our fears about growth cause us to throw up obstacles in the form of all these compelling reasons why we can’t go today, we can’t go this week, we can’t go on this pilgrimage but we for sure will go on the next one- as long as there are no real conflicts, no problems with our health or at work or the kids don’t need us to go to their soccer game or the air conditioning on the bus won’t make us sick…..I am sure that is part of what happens. But there seems also to be a couple of other things that might be happening as well, and that is that the pilgrimage itself wants you to really work for it, it wants to test your commitment to the true voyage- which of course isn’t anything at all about going to India or anywhere else, but about the voyage of self-discovery, of discovery about how things truly are, and what you’re going to do about it. So it seems to me that this is also part of what’s going on. Of course, I don’t have any empirical, factual support for this belief- but I do believe it.

And hand in hand with this kooky belief is this other one: there’s absolutely a force that does not want you to go.

This is the negative force, call it what you will, I don’t have a name for it really, but I believe it’s there and it acts in the world and in our hearts and minds and souls and it isn’t your own personal desire for staying behind, staying stuck where you are, but an impersonal, external one that wants us all to stay behind, to keep doing what we’ve always done, that does not want anyone to seek the light and leave the darkness.

So in order to accomplish pilgrimage, you have to begin the journey by defeating these forces who are conspiring to keep the whole thing from happening. Everyone who went on this particular pilgrimage did just that. To lesser and greater degrees to be sure, but we all had to face down these demons.

And I just mention this in case you’re ever in the position of embarking on your own pilgrimage, because you need to be prepared for it. And if you are, if you kind of expect that the terrain is going to be questionable and sketchy, and last-minute things and first-minute things are going to get in the way, and you’ll feel fearful and nervous and you’ll be convinced that it’s the wrong thing to do- then you’ll be able to just take a deep breath, tell yourself that these obstacles are not real, that they’ll resolve or turn out to be okay and that you’re committed to going forward no matter what, and you’ll end up going on your pilgrimage and gaining what’s to be gained.

If you don’t see the obstacles as part of the path, you’ll succumb to them and your pilgrimage won’t happen. The Buddhist conception of this force that stands in the way is Mara. Mara is the guy whose realm is that of the sense pleasures, of samsara, and he doesn’t want us to leave. He tempted the Buddha when the Buddha sat under the Bodhi tree. It’s not that the force is evil, exactly. But it wants us to stay.

And the thing is, the door will open. It isn’t the case that Mara can keep the door closed if you really want to open it. He’s just going to keep telling you that it probably is closed, that even if it isn’t locked, well, it’s way too heavy for you to open it, and in fact you probably won’t like what’s behind the door anyway, and wouldn’t it be nicer to leave the door alone and go over here where there’s a nice meal of your favorite food, and there are some important emails to answer, and this movie you’ve been wanting to watch….

But if you say, “Yeah, that’s okay. I’m going through the door anyway,” then the door will open when you tug on it. The door can’t stay closed to you, to anyone who wants it to open.

More to come. Watch this space.

9 thoughts on “Notes from A Pilgrimage”