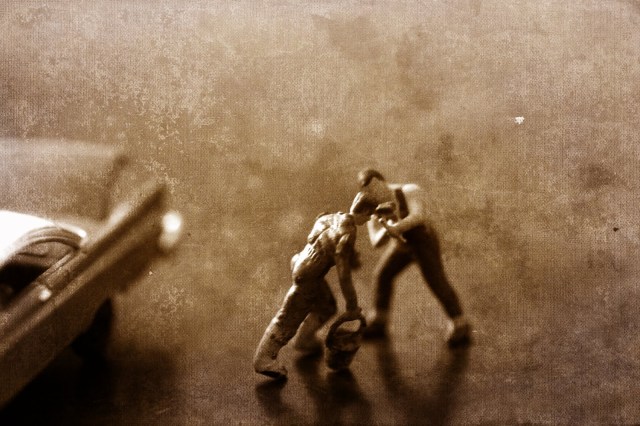 So I just got back from a three day class in extreme close quarters combat. Fifteen guys. There were cops and special forces operators, fighters, guys you’d expect, and some were accountants and desk warriors who like to bang hard for fun.

We fought in the dirt on rocks and spent shell casings and broken glass. We fought inside cars. We ganged up on each other two on one and tried to kill each other. Guys were dropping elbows into faces, knees into groins, grinding hands with boots, pistol whipping. We wore padded helmets and groin protection, but no other gear. We went full speed, full contact. We shot each other with simmunitions at point blank range over and over, hard little soap bullets that leave bleeding, welty bruises wherever they hit. We slashed and stabbed each other with training knives that were not sharpened but were plenty hard and got your attention just fine. I dislocated my thumb and broke my partners rib and I have never had this many bruises, cuts and welts.

I look like I fell down five flights of stairs.

It wasn’t a free-for-all. It was disciplined, driven, and focused. It was technique specific and designed to strip our combatives down to the most effective, most reliable moves that we can work in any situation, no matter how dire. It was about getting pressure tested by dedicated, violent opponents whose only goals were to knock you down, knock you out, take your gun, take your knife, and completely overwhelm you.

It was the most fucking awesome thing I’ve ever done in my life.

I found out a lot about my own strength. Not that I haven’t been tested before, but this was a good long swim through a dark place, and I loved it. Sure I was scared of it. Apprehensive. It looked ugly, and it was ugly. I felt sick and trembly before every evolution.

But when it was on, something deep and primitive and incredibly powerful arose in me and I felt like I could kick a dinosaur over a mountain range or smash rocks with my bare hands. In one evolution I picked up one attacker and threw him at the other guy who was charging me, and it felt like I was tossing a can of coke into the trash. In the car fight I pinned my partner against the passenger door and I could see the door flexing outward as I drove with my legs to take up space. I think that was when I broke his rib.

I don’t know what’s wrong with me.

I don’t care, either.

And now I am home. Eating ibuprofen like candy. Wincing and limping and grinning like a dog. The woman is at work but she’ll be home soon. I am going to feed her some pan-seared salmon and garlicky smashed potatoes and buttery green beans and I’ll open a bottle of good red wine and she’ll look at my lumped up bald head, my cut up face and blackened eyes and god bless her she won’t say a word.

I am a happy man for gaining her love.

I am going to go out in the backyard and howl at the vault of the sky now.

I am not on my last leg.

But I have got a deep silence in me right now.

This stupid blog has given me, and continues to give me, a great deal of pleasure. I like the folks that come by. I like the company.

For a man who can scarcely tolerate the presence of other human beings, it is a kind of blessing.

And I know my refusal to hold up my end of the bargin is a betrayal.

It is my hope you will forgive it.

Despite my silence, I think of you daily. I think of you, specifically, going about the motions of your day and living and breathing in the heady scent of your own true lives. I am glad of you, the way you hang in there, the way you nurture your courage for the dark hours, the kindnesses you show to those around you who depend on them, and more so to those who don’t even know what you do.

It feels sometimes that we have been gathering around fires in the darkness for millions and millions of years, we small few.

We band of oddballs.

Know that I would spend myself in defense of you.

Know that I would exact a mighty cost from those that would harm you.

Know this as well:

I love, though I fail at it.

In the end, love.