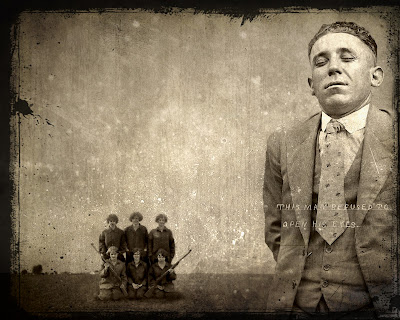 We’re all just waiting our turn.

I don’t understand it. Something like eighty percent of all living things die before they get the chance to procreate. Even assuming that there isn’t any purpose to life other than keeping the machinery grinding along, that’s an awful lot of waste. I think about the seemingly endless parade of the dead who preceded us here, all those lives lived and now gone with barely a trace, numberless and faceless, gone, swallowed up like they’d never been. And that’s humans, nevermind the Neandertals and protohumans and the whole ascending line from prokaryote to me.

All of that? Just to arise and fall away again?

It seems like my life matters. To me it seems that way. Yet it doesn’t seem at all unusual to get born, live, and then die.

And still, I can’t conceive of ceasing to be.

But I have seen so many dead people. An awful lot of suicides, and those left-behind bodies make it pretty concrete: you can check out any time you like.  It’s real, and permanent, and you don’t come back from that.

You don’t come back from any of it.

But I guess I won’t ever know a world without me in it. Right? I mean, as long as I’m alive, the world has me in it, and I’m able to comprehend it and place myself in it, and enjoy it, and think that in some form or other, reincarnation, bodily ascension to heaven, whatever, I’m free to speculate and believe whatever I like, because I’ll never be proven wrong.

Once I’m dead, the world and everything in it ceases to be for me.

I kind of like the idea that I will never know a world without me in it.

The rest of you?

As usual, I feel sick about my failures. I am a damn mystery to myself.

Why this stubborn refusal to be perfect?

I know what I need to do.

Good luck getting me anywhere near it, though.

Tonight I’m making a baked cod in a provencal style tomato sauce served on a slice of rustic bread, toasted and smeared with garlic and olive oil.

A word here about your friendship to me, and support, and love, and that is that I am humbled and befuddled and overwhelmed by it and greedy for it.

Another one of my flaws.

Here’s a poem from Jack Gilbert that kind of puts a good face on it (if you have been reading here very long, it should be familiar):

The fish are dreadful. They are brought up
the mountain in the dawn most days, beautiful
and alien and cold from night under the sea,
the grand rooms fading from their flat eyes.
Soft machinery of the dark, the man thinks,
washing them.  “What can you know of my machinery!”
demands the Lord. Sure, the man says quietly
and cuts into them, laying back the dozen struts,
getting to the muck of something terrible.
The Lord insists: “You are the one who chooses
to live this way. I build cities where things
are human. I make Tuscany and you go to live
with rock and silence.” The man washes away
the blood and arranges the fish on a big plate.
Starts the onions in the hot olive oil and puts
in peppers. “You have lived all year without women.”
He takes out everything and puts in the fish.
“No one knows where you are. People forget you.
You are vain and stubborn.” The man slices
tomatoes and lemons. Takes out the fish
and scrambles eggs. I am not stubborn, he thinks,
laying all of it on the table in the courtyard
full of early sun, shadows of swallows flying
on the food. Not stubborn, just greedy.

26 thoughts on “This Man Refused To Open His Eyes”