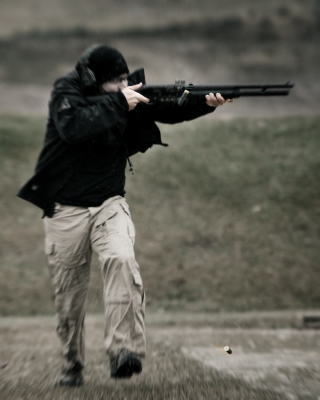 Today was all about the loud noise.

I do so much training and shooting with the handgun that when we bust out the big guns it comes as kind of a shock. The shotgun is a complex weapon system that requires a lot of hands on time to run efficiently- it is not a gun for the simple-minded.

But it throws so much destruction downrange that I can’t imagine ever choosing something else if you knew it was time to get your killing on. There are a million guns out there that are easier to shoot. This bitch punishes you every time you torch off a round.

It seems a good trade-off.

When the FBI got in their big shoot out with Platt and Matix, they were seriously fucked up by two guys who knew how to bang. Platt and Matix got the fuck shot out of them, mortal wounds early on in the fight, and they kept going and brought the fight to the FBI. They murdered Agent Jerry Dove and Agent Ben Grogan, and one of their rounds tore through Agent Ed Mireles’ forearm, disabling it.

He figured out how to rack his shotgun with one good arm, and he got up off his shot ass and fucked those two motherfuckers up.

That was a real teaching moment for the whole L.E. community.

It was after Newhall that we started focusing on how training mistakes carried over into real world shooting incidents, when CHP officers were picking up their spent brass and putting in their pockets during a firefight, which kept the range clean but cost these guys their lives when the shit was pouring down on them. Ed Mireles and the FBI shootout taught us that we needed to teach our people how to keep fighting when one of their arms was blown off.

So now we practice everything with our good side and our support side. In case we get our shit shot in the opening salvos.

I could go on and on about this shit.

It is the most interesting kind of chess there is.

It is a very interesting game.

It is my passion. I seek out the best and most difficult training I can find. I try to adapt what I learn and pass it on to everyone else. Three times a year at least I spend my own money and use my own time to get in front of a serious trainer and get my ass handed to me. Knife fighting. Empty hand. BJJ. Crazy Monkey. Low-light handgunning. Last year I went to a four day pistol class and shot with my other fucking hand the whole time.

I outshot most everyone at the class, too.

But not everyone drinks the kool-aid.

It can be a struggle.

You just never know what’s going to come at you. Who is out there, sharpening their knives for you.